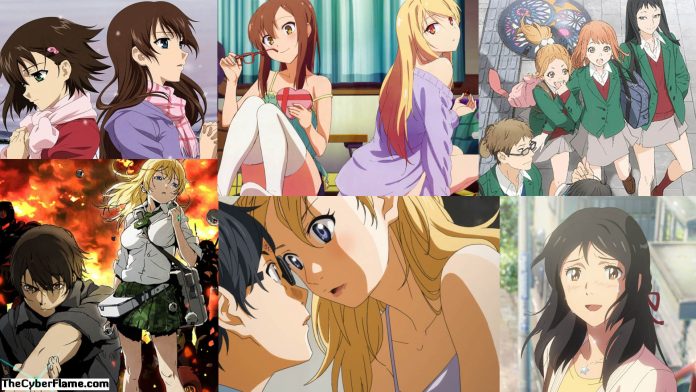 Love is one thing that is unique to the whole universe. Everyone thinks they understand it entirely, but they don’t understand it. Some want it, and some reject it. No matter which path you are on, no matter how icy your heart is, there are times when you sense the need to be loved. Let’s go to a list of the highest Romance anime (also related to other genres as Romantic Comedy/Harem/Ecchi/Slice of Life/Drama/Fantasy/…). This list includes excellent romantic anime movies & series, but not a common list of best romance anime movies/series. Here are some randomly chosen top anime that are rated as best romance anime. You can watch some of these best romantic animations from Hulu, Netflix, Crunchyroll, YouTube, or Amazon Prime.

Kimi No Na Wa is an animated film released in August 2016. If you do not like romance, you can still watch ‘Kimi No Na Wa.’ Also, it is because there is no intriguing love story in the film. But the beautiful art and sound carry you forward. The story is sweet and straightforward, and so are the characters. The whole atmosphere that the film creates is gorgeous, and it makes you feel warm. Also, The main characters in the film are Mitsuha Miyamizu and Taki Tachibana. Mitsuha lives in rural areas. Thus, This makes her dream of chaotic city life in a city like Tokyo. She dreams of living in the town as a boy. Taki Tachibana lives in Tokyo. He has a kind heart but is quick to anger because of his impatience and stubbornness. Also, he is pretty busy trying to balance part-time work and school life. One day they both wake up to find out that they have moved. It’s not just an ordinary place exchange, and it’s a body transfer. Taki wakes up to find Mitsuha in his body and vice versa. So, they begin to search for each other to understand what has happened.

This is undoubtedly one of the best romance anime with high ratings, and this was very popular due to various reasons. Your Name (2016) has won the LAFCA (Los Angeles Film Critics Association) Best Animated Film Award in 2016, the Best Animated Film in 2017 by Mainichi Film Awards, and it also won the Grand Prize Award on the 20th Japan Media Arts Festival. “Kimi no Na wa” is a must-watch Romance/Fantasy anime, as an anime fan. ‘Your Name’ (A.K.A. Kimi no Na wa) & ‘Weathering with You’ (A.K.A. Tenki no ko) are connected in a way.

You have to get involved in this kind of animation to get through the whole series. The first six episodes were excellent and refreshing. Also, the characters were fun, and it was fun to spend time relaxing. But as the series progresses, you will realize that the same thing is happening again and again. However, this can do if you can keep things interesting, and ‘Sakurasou no Pet na Kanojo’ does its best. Sorata Kanda is the main character in this animation. He is a good boy with good qualities and a kind heart. So when the abandoned kittens were founding, they could not go until they found a suitable owner. But since his accommodation does not allow pets, he wants to go to Sakura Hall, a hostel full of adventurous people. There he intends to find owners for the cats so he can go back to his shelter. But while he is staying there, he learns more about the other hostel members and gets closer to them.

It is a refreshing love story. Such Shoujo breaks down some of the stereotypes surrounding romance anime. The anime was prevalent and received positive responses. The characters are somewhat likable and somewhat relative. Although she has no unique qualities, she is pretty interesting and runs the series well. The protagonist of the anime, Kuronuma Sawako, is a beautiful high school girl. She is a bit sweet and simple, but her classmates and her peers have misunderstood her. The main reason for this misunderstanding is Savako’s appearance, which is very similar to the ghost girl’s action movie ‘The Ring.’ It earned her the nickname Sadako from her peers. But Sawako wants to be a normal girl and a close friend. Also, she is drawing to Kasehaya Sauta, the most famous person in the class. One day Kasehaya starts talking to her. So, it makes Savako very happy and gives her hope of having a good friend.

It is a good love story, and the beautiful art and music create an unforgettable atmosphere. After watching this movie, you will feel a bit different for a while. Here, Shoya Ishida was a former troublemaker. Further, he loved to have fun. He did not care about others and did everything he could not be lazy. Shauko Nishimia is a deaf girl who is transferring to Ishida’s class. She is also a beautiful, kind girl who likes to be friends with her class kids. But Ishida and various other students started harassing her and making fun of her. After her mother complained to the school authorities, everyone, including his closest friends, blamed Ishida. Nishimia is transferring to another school, and Ishida is left alone. No one talks to him. Ishida is in her third year of high school and regrets his actions and hopes to meet with Nishimia and make corrections. Thus, this is highly recommending everyone watch this movie.

It is an action/romance animation in which the main character, Riata Sakamoto, finds himself stuck in a real-life version of the game he is playing. Now, to return to him, he must kill the other participants to win a symbol of victory in the form of a green stall. His sports wife, Himiko, assists him. The two begin to get closer to each other while trying to escape this life and death game.

Kaoru meets a girl at Hanabishi train station. Seeing her confusion, Kaoru decided to help her find her destination. As they continued to search for the girl’s destination, Kauro realized that they were traveling in their neighborhood. It later appeared that the girl had a space to go. Kauro invites her to his house to solve the mystery and soon realizes that this girl is his childhood friend and boyfriend.

Death is never happy. It always brings darkness and sorrow. If someone who loves it dies, the world seems to have come to an end. Kousei Arima, a pianist, suffered a similar fate when his mother died. He feels sad and cannot play the piano. Also, depression strikes him, and he spends two years without a word. Destiny begins to change when he meets Kauri, a violinist. Maybe you feel like the anime is getting a little dramatic, but I think it should be.

It also is a beautiful little romantic animation. Imagine living in the same house that you crave, but she can’t move because she’s cold on you. It is what happens to Shinichiro, who does not understand how Hiromi’s parents can help her move forward from her tragic childhood when she dies. Besides, a naughty girl from school is interested in him. And wants his parents to learn dance lessons that he does not like. He has to manage all this while trying to open Hiromi.

Here, Utena Tenzo wants to be a prince. This strange desire remained in her because she was comforted by some prince after her parents’ death. Also, he had put a ring on her. Years later, she is at a school where the Rose Bride, Auntie, and other students with similar rings fight to gain her magical powers. So, she triumphs over Anthi and begins her journey of love and darkness.

Orange is a fairly recent romantic animation. So, the story follows the life of Naho Takamiya, a high school student. One day she receives a letter. Significantly, it was sent by her future soul. So, it has described her regrets. And mistakes in life and what she needs to do to change them. The story is beautiful writing, and the anime brings the character to life and touches on many emotional and mature topics.

Also Read: The Rising of the Shield Hero Anime – A Brief Introduction.

Anime is a big topic. There are so many more to add to the Best Romance Anime list (both Movies & Series). Stay tuned for the next articles which may describe more lovely anime to watch. And don’t forget to comment here about your best romance anime.

How To Eject Disc From Xbox One – Comprehensive Guide (2022)

How To Connect Switch To TV? Complete Guide