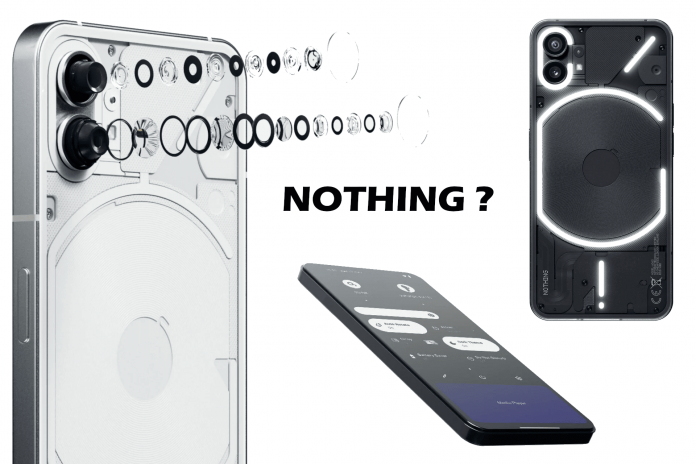 What is Nothing? Who started it? Nothing is a company from Carl Pei, former chief of OnePlus. So, what is Nothing Phone 1 & why was that so famous? What’s new and interesting about this phone is what they’ve chosen as their differentiating feature. If you’re a new company coming along, you have to give people a reason to choose it over the boring, established ones that most people buy.

And so, OnePlus in the past would lean on exceptional specs for a low price, that was the thing that you could count on from a OnePlus phone to stand out. With Nothing, it’s Design. Their goal seems to be to bring back a little more excitement and intrigue into the consumer electronics industry, which is becoming more and more monotonous.

What is Nothing Phone 1?

What is the Nothing Phone 1? Nothing Phone (1) is just a good mid-range mobile device with unique flashing lights on the back. The distinctive light-up notification “Glyphs” found on the Phone 1 are mostly a decorative element. Actually there are some unique use cases for glyph notification system. There is absolutely nothing wrong with that as long as it is supported by reliable performance and a reasonable pricing. Also, Nothing company has promised four years of security updates. And that is a very good thing.

It is recommended to only use with chargers compatible with Quick Charge 4.0.

Both a Micro-SD card slot and a headphone port are unavailable.

The IP53 splash and dust resistance grade for the Phone 1 is typical for mid-range phones.

The Nothing Phone (1) can be unlocked using fingerprint or facial recognition, which even works with face coverings.

Apparently, the Nothing company is working on an ecosystem around this. They started with the earbuds, which were not the most amazing sound or performance in the world, but had a very solid user experience, and a very distinctive design. And then they moved on to a phone, which didn’t have the most amazing performance or specs in the world, but had a really solid user experience, and a really distinctive design.

So what’s next? Is it gonna be a tablet, or a smart speaker? It could be anything, but whatever it is, we can safely expect it to not be super focused on performance and specs, but to just have a solid user experience, and a distinctive design. That’s what they’re going to lean into. That’s smart. It is nice that we’re still getting cool-looking stuff. So, we hope that you did get a good idea regarding what is Nothing Phone 1.