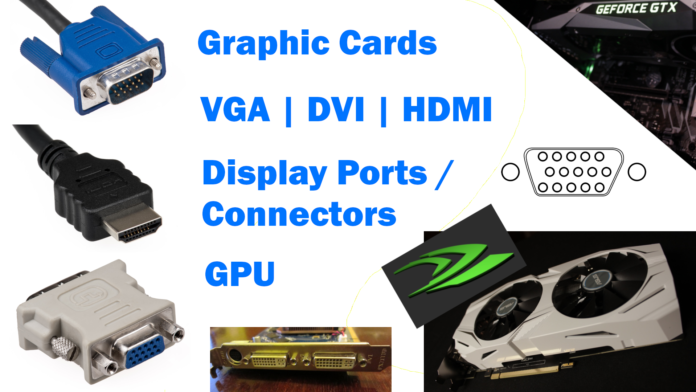 First of all, you should understand the difference between VGA & Graphic Card. What is the meaning of ‘VGA vs. Graphics Card’? Let’s talk about it. I will also explain Types of Graphic Card Ports, What is a VGA card, and a Comparison of VGA Vs. HDMI Resolutions. I think you’ll learn a lot of things from this article. So, Don’t miss anything. 🙂

VGA Vs. Graphics Card – The Difference.

VGA is not a Graphics Card. It is a Display Input / Output Standard primarily used for GPU’s in old times (and Also it is still in use with some GPU / Video Card brands/models.)

Graphics Cards / GPU – What is GPU?

GPU means an electronic device that stands for the ‘Graphics Processing Unit’ designed to rapidly manipulate and alter memory to accelerate the creation of images intended for output to a display device. These GPUs are currently used in many platforms such as Mobile Phones, Personal Computers (PC), including Laptops, Workstations and Game Consoles like SONY Play Station & Microsoft Xbox One / 360.

GPU and Graphic Card is not the same exactly. The graphics card is the whole hardware, and the GPU is a chip used for GPU. It is a part of the graphics card (same as Onboard graphics). Graphics card is a piece of hardware that is responsible for producing images we see as outputs to monitors. This is using for Image Rendering – Converting Data in a way that display devices (monitors) can understand.

This is a little more replacement for better performance beyond Integrated Graphics that comes with the Motherboard or CPU (Central Processing Unit). Video Card is an expansion card that can be used to generate Output Images or Visuals to a connected display device. Frequently, these are introduced as separated/dedicated graphics cards in computers.

Previously, Graphics Cards [GPU = Graphics Processing Unit] had a VGA interface (PCI / AGP). That was the main Display Output Standard earlier. That said, usually, a graphic card connects to a monitor with a three-row 15-pin cable. A lot of people still have the same style. That’s why people use the graphic card/video card/display card called the VGA Card.

If we compared VGA Vs. HDMI Resolution, undoubtedly, we have to accept that HDMI is the Best.

Types of other Graphic Card Ports

But with the New technology, HDMI, DVI, and Display Port have been introduced instead of VGA. These can be used for Higher Output with Better Quality and Higher Resolution. Some GPU cards have ports of all kinds. But the most commonly used standard in the present is HDMI.

Maximum Resolution limited by the available bandwidth of the connected hardware. This works as an Audio/Video interface for transmitting Video Data and Digital Audio Data.

DVI only carries Video, no Audio. VGA connectors and cables carry only Analog Signals while DVI carry both Analog and Digital Signals. Overall, HDMI is Better than DVI & VGA.

When choosing a Graphics Card, you should consider these connecting methods because it is essential to work with the latest technology and expect the best performances. Also, it will affect to upcoming Upgrades of your devices.

There are many GPU brands in the market to buy. What should we select? It depends on your requirements. Don’t forget to check the available connections with the graphic card. You must remember that this is not the only thing we care about when buying a device like this. There is a lot more to check. I will bring them to you by another article explaining with a Graphics Cards Buying Guide.

Nvidia & AMD is the most popular and best graphic card providers for the consumer market, currently. So, think before getting a card and study more about the devices not to waste your money.