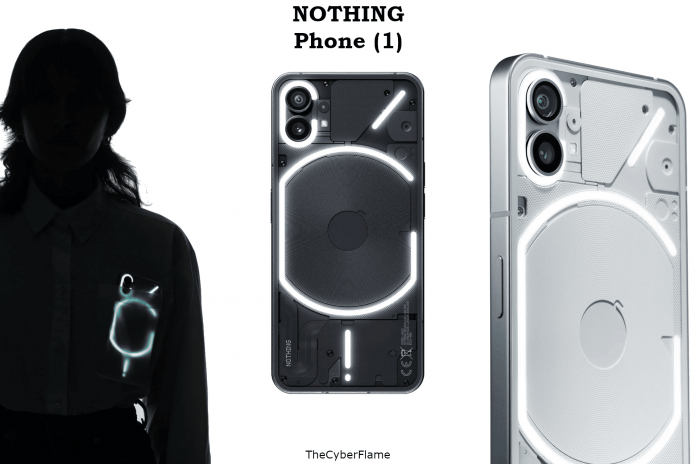 What is special about Nothing Phone?

There’s both a dark and a light version of the Nothing Phone, and they both have flat aluminium sides. all the way around, the strategically placed antenna lines, power button on the right, and volume on the left. Back side is the signature transparent Gorilla Glass with an attractive design underneath it. It is a pretty simple design, but it is just nuanced and complex enough to appreciate it. It has indicators for certain pieces inside the phone, and most importantly, it has the 900+ LEDs organised in those diffused strips all around the back of the phone, with a unique functionality.

Probably you’ve never seen a phone that looks quite like this before. In a world where $1000 phones are now normal, it’s refreshing to see a mid tier phone with so much attention to detail under a reasonable price.

It does look like an iPhone with the flat sides, the dual camera placement, and it has the shape of an iPhone. The lights are what’s really unique here, as you can see, the Glyph Interface. Not only do they look quite unique, but they also serve a purpose. There’s one light up around the cameras, one at the top right corner, one big one all the way around the wireless charging coil in the middle, then an exclamation point at the bottom. So, for getting a phone call, the lights all just light up and sync with whatever ringtone you have. The exclamation mark at the bottom will also light up to indicate your charge status.

It’ll also light up when you talk to Google Assistant. They also made a transparent case to be able to see it all the time. It would be better if what the settings could let us choose the LED lights to do. But as of right now, only options are to change the brightness, and then to turn certain light features on or off. Based on the light flashing, what type of notification the user have, what app it’s from, and who’s trying to contact you.

Some people may wondering if they took a lot of battery power. Gladly, they don’t. If you leave them literally on all the time for an hour straight, they’ll take maybe 2 to 3% of your battery, so it’s almost nothing.

Is Nothing Phone 1 Worth Buying?

A good place to start about using the actual phone would be the price, and the price is starting at nearly 490 United States Dollars (~$490). That’s the baseline price for this phone. And it behaves exactly as you’d expect from a mid-range Android phone in 2022, and mean that as a compliment. There are some really good phones in this price range, where it’s kinda hard to go wrong with the top options here. The Pixel 6as, the Galaxy A53s of the world, and the Nothing Phone fits right in alongside those. So it’s really good. It has a Snapdragon 778G+, and it runs Android very close to stock.

The base price edition has just 128GB of storage, and that model only comes in Black, and also, there is another version which has 256GB of storage, and 12GB of RAM, for around 600 USD, which performs very well.

Nothing Phone (1)’s display is a pretty big flat 6.55-inch, 1080p OLED with pretty good brightness up to 1200 nits. It has an under-display fingerprint reader that works very well, and a corner hole-punch with the selfie camera. Also, it has perfectly even bezels all the way around, which is a pretty notably more expensive thing to achieve, but it also has a high refresh rate. It will dynamically bump between 120Hz and 60Hz, depending on what you’re doing, and it has a 240Hz touch sample rate.

So, it is very responsive and smooth, especially in just regular day to day stuff. It can drop some frames when you’re doing some more heavy stuff, some gaming, when there’s just a lot more going on, and that’s understandable.

Nothing OS is mostly very close to stock Android, with just a few of their light touches on top. Lots of those touches are aesthetic and animations. Like they have their own fonts with this dot matrix style, this nice extra custom animation when you pull open a folder on the home screen, or pull down the quick settings, and they have a couple of extra home screen widgets they’ve tossed in. According to Nothing, “Nothing OS delivers only the best of Android,” and there’s no bloatware. It is like there is just a very clean, reasonable, refined Android experience.

There’s a 4500mAh power battery inside, which may helpful to you to comfortably getting all-day battery life with. And the charging speeds are pretty modest. The 15W wireless charging, and 33W wired charging will get you half battery in half an hour.

Nothing Phone’s cameras are particularly average. There is a pair of 50 MP cameras on the back, with the primary having OIS and at f/1.8, and with 114-degree ultra wide.

Is Nothing Phone 1 Waterproof?

Nothing Phone (1) is only IP53 water resistant, which means no dunking, or splashing, or wiping down the phone, like you might be able to with an IP68 phone.

The Nothing Phone is made from a 100% recycled aluminium, and also, an impressive 50+ percent of the plastics inside are made from bio-based and recycled sources. Also, the box it came in is very thin and small, which of course is too small to include a charging brick, but it is fully recyclable paper and cardboard, which can be appreciated.

Basically, the Nothing Phone (1) doesn’t feel like cheap corner-cutting, as much as that does feel like they set out to make a phone that hits a certain price point, and then separate it from the pack by being a good user experience, but also having a unique, cool, interesting aesthetic. That seems really smart.

Also Read: What is Nothing Phone 1?