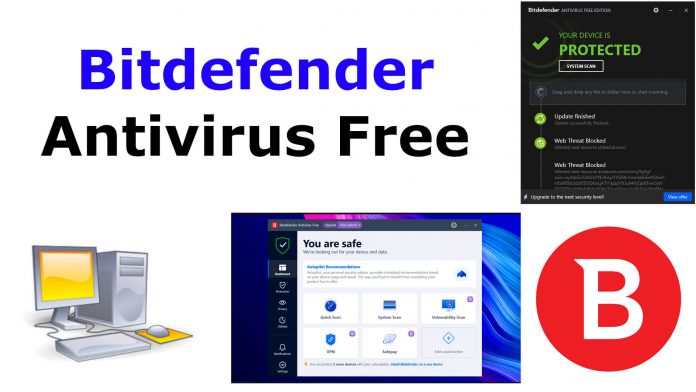 Bitdefender Antivirus Free was one of the best free antivirus software for Windows (Windows 10, Windows 11). It provided absolutely free antivirus protection for Windows 7, 8.1, 10, and 11 for many years. This free edition provided basic protection for computers against e-threats. Also, as a feature of online threat prevention, the Web Protection feature was very helpful in avoiding phishing and fraud attempts when browsing the internet.

Under basic protection against e-threats, Virus Scanning & Removal, and Real-time Threat Detection functionalities were really outstanding. Bitdefender’s powerful scan engines guaranteed the real-time detection and elimination of all malware, including Trojans, rootkits, spyware, ransomware, and zero-day exploits. Utilizing behavioral detection, this software closely monitored your running applications. It acted right away if it finds something suspicious.

Even though packed with essential protection features every Windows computer needed, the Bitdefender Antivirus Free was a fast, lightweight, and well-optimized software. Worked smoothly even on most of the low-end PCs without slowing down the systems too much. This powerful free antivirus protection had a very simple user interface with a minimalist design.

*System performance may be affected on devices with old-generation CPUs

READ: Best FREE Virus Guards for Windows in This Year…

And there is something else you may need to know. That is, a newly architected Antivirus Free application for Windows has been introduced by Bitdefender in March 2022. This one is different from the older (original) one in many ways. But still, it is capable of providing free antivirus protection for your computer.

In comparison to the previous free edition, the new one offers more features, functionality, and a better user experience, including options for custom scanning scheduling and malware protection. The new free version furthermore offers email security for Outlook and Thunderbird, adding an additional line of defense against malware.

Also, there are several features that are only available in paid versions of the Bitdefender Antivirus. That is why there are multiple upgrade buttons in the interface/dashboard. In the new user interface, you can see many of the options are locked for free users. When talking about the new UI, clearly it is more attractive & has a better look with a modern feeling.

However, even the free edition uses the same antivirus engine as the paid products. So, there is nothing to worry about the basic antivirus protection that a user may expect from a free antivirus program. A function that detects exploits and alerts users if they are in danger of compromise or are vulnerable is also available in this new version.

The brand-new Bitdefender Antivirus Free for Windows which has been re-engineered from the ground up has a download size of more than 500 Megabytes. This new product seems powerful enough to detect and block the latest threats targeting today’s modern environments.

How to Activate Bitdefender Antivirus Free for a lifetime

You can download the latest full version of the Bitdefender Antivirus Free 2022 for Windows here.