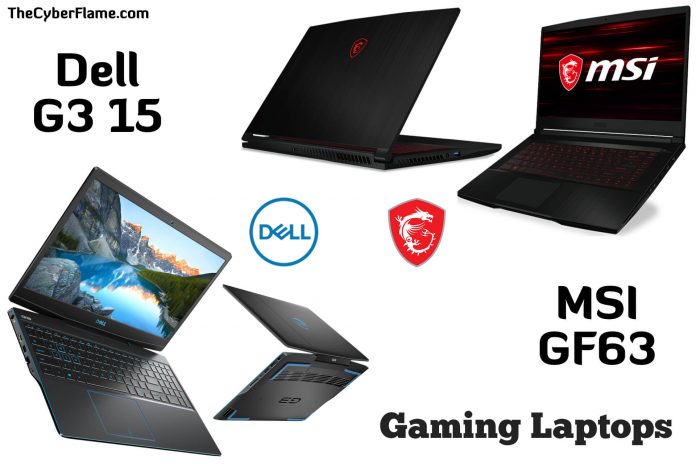 Dell G Series and MSI GF Series gaming laptops brought a great deal to the market, as a nice configuration for gamers. Those are DELL 3500 G3 15 & MSI GF63 Thin 10SCX Gaming Laptops, which both of the devices have 10th Gen intel i5 CPUs. So, this is a fair comparison of Dell G3 15 vs MSI GF63 Thin 10SCX.

When it comes to midrange/budget gaming laptops, there are so many choices. But it is not so easy to find the best one among various kinds of laptops with different hardware combinations because the market is very competitive now, and people get confused when searching for a perfect match device within the budget. As we all know, Asus, MSI & Dell are the top brands for consumers, currently. All of them come up with the latest technologies and adorable designs. Even though ASUS has provided many top-level products that could be compared here, only Dell G3 15 & MSI GF63 will be considered in this article.

Dell G Series laptops are built for both entry-level and mainstream gamers that want to do a lot of gaming and multitasking. They combine powerful CPUs and GPUs with Alienware-inspired thermal design and optimized performance profiles in a single computer. Gameplay is crisp and detailed thanks to NVIDIA® GeForce RTXTM 3000 Series laptop GPUs and up to 4GB GDDR6 video memory. Plus, whether you’re retreating into your favorite game or working on CPU-intensive assignments for work or school, the latest Intel® or AMD CPUs deliver responsive, powerful performance.

Dell G3 15 laptops come up with a very attractive design, which feels like some kind of a futuristic device. It is inspired by the Dell Alienware lineup. The Dell G3 15 gaming laptop has an all-new, bold appearance with stylish color options. Eclipse black or Alpine white with blue gaming accent are available selections.

Dynamic Game Shift technology, NVIDIA® GeForce® discrete graphics, and 10th Gen Intel processors are featured in this 15-inch gaming laptop. Dell G3 can give the system a turbo-boost that can be activated at any time when gaming becomes vital. By hitting the Fn+G keys on the Dell G3 15’s keyboard, you can quickly activate it. Without ever leaving your game, Game Shift activates a dynamic performance mode within the Alienware Command Center. This increases the speed of the fans to keep your system cool as the CPUs work harder.

There is a wide range of high-performance gaming laptops, in MSI GF Series. MSI Katana laptops are the currently most expensive gaming monsters of this GF series. (“Be Enchanted With The Dragon Spirit.”-MSI)

Among such massive performers, MSI GF63 Thin 10SCX is a nice player in the market, which has prepared to grab the attention of most of the customers within a limited budget.

The one who can adapt to change the best is the one who will survive and evolve. That’s what MSI says. With Intel® HM470 Chipset and 10th Gen. Intel® Core™ i5 Processor, the MSI GF63 Thin 10SCX gaming laptop perform as well as how gamers expect. NVIDIA® GeForce® GTX 1650 provides a notable boost, and it is a Max-Q version GPU which is a little bit slower than a regular GTX 1650 GPU for laptops. It is designed for thin laptops. NVIDIA Max-Q is a ground-breaking method to designing the world’s thinnest, fastest, and quietest gaming laptops. It strikes the perfect balance between extreme GeForce gaming and unbelievably slim aesthetics.

The top and keyboard cover are both made of metal, with an X-shaped ventilation system hidden behind.

Both Laptops have single-color backlit keyboards similar to the theme color of their brands.

It seems like that the specifications of both laptops are very similar to each other. But probably the Dell G3 gaming laptop is performing better than the MSI GF63 Thin laptop, but there is no such a big difference. The reason to say that is the difference between RAM frequencies (2933MHz vs. 2666MHz ) & dedicated graphics cards ( NVIDIA® GeForce GTX® 1650 4GB vs. GeForce® GTX1650 Max Q 4GB). Both gaming laptops have the same CPU, intel core i5 11th generation processors. Dell G3 has a higher display refresh rate than MSI GF63 10SCX. But it may cause a lower battery life.

Both laptops are a little bit noisy when there is a heavy workload. But they are managing the system temperature well, with each laptop’s advanced cooling systems. So, you may be able to ignore those noises. However, they are noticeably quieter for normal usage.

When considering the build quality and laptop durability, MSI GF63 Thin 10SCX will be a better choice.

And you should aware that there is a common issue with some laptops, that is the hinge is easily breakable sometimes. So, use the devices carefully, and it is better always.

With this Dell G3 15 vs MSI GF63 comparison, now you probably have a clearer idea about which one you should consider for buying among these two. And also you can find out more information from their official websites too.