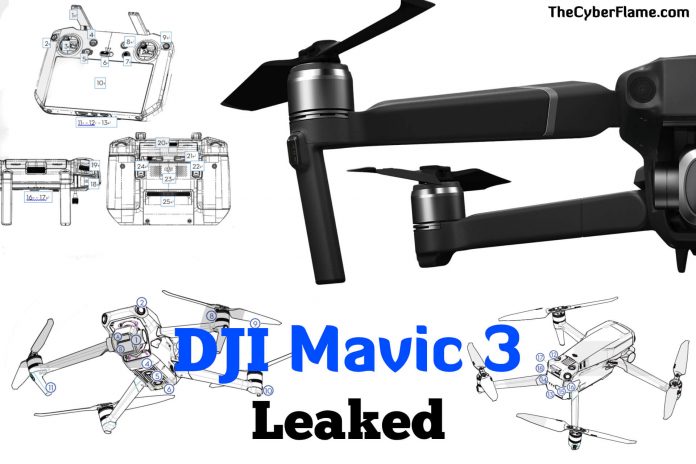 DJI Mavic 3 Drone Release Date, Specs & Price revealed by some leaked information. Also there are some leaked photos of the device. There were a lot of rumors related to the upcoming DJI Mavic 3 drone specifications. Now we have some new data, leaked via Twitter. According to that leaks, DJI has done massive improvements to their flagship Mavic drone series, in 2021. There are many impressive upgrades with the upcoming Mavic 3. I am pretty sure this DJI Mavic 3 is going to be something beyond the expectations.

DJI is a top rated company in the world, famous for advanced, futuristic drones manufacturing. Mavic series is one of their flagship camera drones series, such as DJI Phantom. But the Mavic drones are more comfortable to use mostly because of their portability. That’s the reason for its popularity.

The full Manual of DJI Mavic 3 has leaked, and it has rapidly spread through the internet.

The leak reveals the latest DJI Mavic 3 and Mavic 3 Pro drones specifications, SKUs, and release date. According to that data, Mavic 3, Mavic 3 Fly More Combo, and Mavic 3 Cine Premium Combo are the 3 models intend to come up as the next DJI Mavic drones. Probably, it will shoot 5.2K or 5.7K video. The Mavic 3 Cine will have built-in storage.

The Mavic 3 Smart Controller has a range of 15 km. That is really impressive, and also we will have a lot of benefits. The DJI Smart Controller V2.0, which features the latest (O3) OCUSYNCTM technology, can transmit real-time HD video from the quadcopter camera, up to a distance of 15km. This Remote Controller has a built-in screen with a resolution of 1920×1080 pixels, and also it has new controls with customizable buttons. The controller is capable to connect directly to the internet using Wi-Fi or a 4G dongle.

Also, the DJI Mavic 3 will contain a lot of enhanced sensors, with its new design. When it comes to the Mavic 3 battery life, it has 46 minutes maximum flight time, on a single charge. That is significantly a longer flight time, and a very useful upgrade for everyone.

Another interesting thing is the new Mavic 3 drone has two separate cameras; A Telephoto Camera with a CMOS 1/2″ sensor (12-megapixel, 160mm f/4.4 aperture telephoto lens), and a Wide-angle Camera with a CMOS 4/3″, a large Four Thirds sensor (20-megapixel, 24mm f/2.8-f/11 aperture primary camera lens). It will be a nice thing for cinematographers and photographers. A dual camera system on a DJI drone is very useful.

Leaked documents show few other things which I don’t have mentioned here, but I think you got what you should know. It is unnecessary to compare DJI Mavic 2 vs DJI Mavic 3 drone because the new Mavic 3 is a big upgrade and definitely better than the previous one. But it will be more expensive than the Mavic 2. Currently, many people are excited to experience the latest DJI technology with the Mavic 3.

DJI Spark 2 Release Date, Specs & Price – Will there be a DJI Spark 2 or is it discontinued?