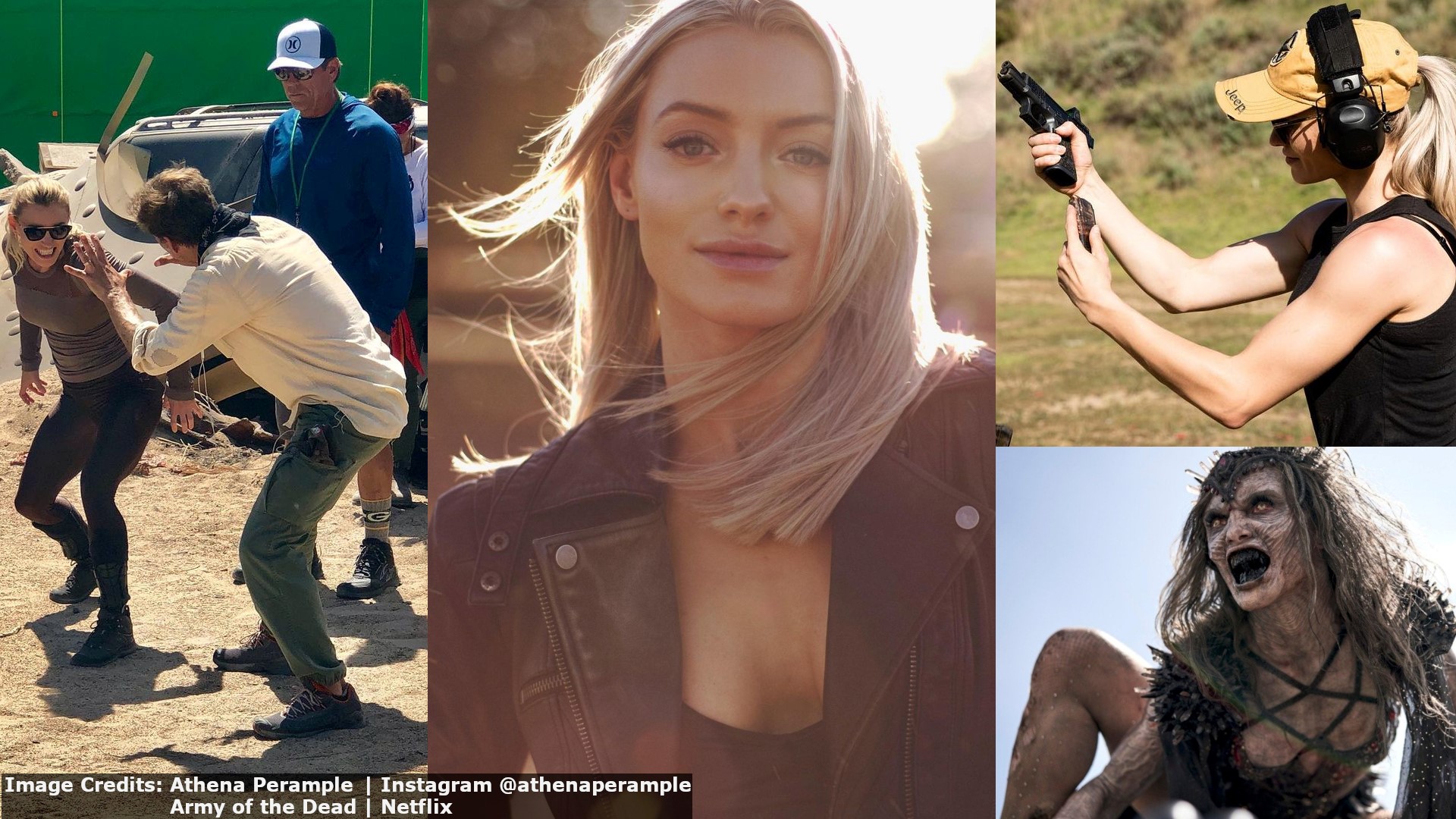 When it comes to stuntwomen of Hollywood, you just can’t ignore the name of Athena Perample. Her name and fame reached new heights after her appearance in “Army of the Dead.” Athena Perample is not only a stunt-woman but a fitness enthusiast, dancer, model, and famous social media influencer. Today, we have decided to talk about this multi-talented actress and a bit about her personal life.

The Early Life of Athena Perample

She was born in 1991 in Traverse City, Michigan, to Cyndi Kay and David Perample. Athena’s primary education happened in a local private school, and she later moved to an esteemed college for graduation. She is pretty much attached to her mom and father even now, although the parents separated when Athena was a kid.

Athena’s father tied the knot for the second time, and she lived with her father together with her siblings. She comes from a white Caucasian background and has a sister and two brothers.

Athena is gorgeous, to say the least, and an upcoming actress. Interestingly though, and unlike most other celebrities, there is hardly any news or gossip about her love affairs although she is reaching her thirties. It seems she is more focused on her career than anything, which she is doing fantastically well up until now. Or, she might not want to disclose much about her lover due to personal reasons.

The Career of Athena Perample

Athena started her career as a dancer, for which she had a special love from her childhood. According to the reports, she started dancing at the age of 11, and currently, she is a pro of dancing forms like ballroom, hip hop, salsa, belly, and many more.

However, her journey in acting commenced in the year 2011 when she appeared in a T.V. show called “Glee.” Athena performed a role of a dancer in that show, and later in the T.V. series named “The E.A.T.S. Community,” she had the opportunity to work with popular celebrities such as Roxy Shabestari, Jason DeWitt, Evan Warner, and many.

Although the journey was kind of a smooth one for Athena, she hardly had the opportunity to take her name into a worldwide audience until she appeared in the Netflix show “Army of the Dead.” This movie was directed by Zack Snyder, and world-famous names like Dave Bautista, Ella Purnell, Omari Hardwick, and Nora Arnezeder are included in the cast.

Athena Perample played the role of Alpha Queen in Army of the Dead, and no wonder you are reading this article because of the popularity she received after this role. Let’s take a moment and see the character she played in this Netflix movie.

First of all, Army of the Dead is a zombie heist movie, and the storyline goes around a zombie outbreak in Las Vegas. The movie was released on the 21st of May 2021 on Netflix, and it was on screens before in selected cinemas.

The director, Zack Snyder, is no rookie to Zombie movies as he has previously directed a movie called Dawn of the Dead in 2004. He seems to have done a brilliant job in Dead of the Army, as it is full of thrills and unexpected incidents throughout the duration.

Coming back to Athena’s role in the movie, which is the queen of zombies, it was the best we have seen thus far in her relatively short career. Yes, there were some notable movies and characters before, but if you have previously watched her shows, you would realize that this is the opportunity she awaited to showcase her talent.

In her role of Alpha queen, Athena Perample had tons of physically demanding stunts throughout the movie, which she has done unbelievably well on herself. Some of the scenes consist of jumping onto burning cars! She has previously appeared in the Marvel series called WandaVision, in which she performed another character of a stuntwoman with a higher rate of success.

In addition, Athena has done the stunt double of Leila George in the Animal Kingdom series. Her experience in fighting styles such as Tae Kwan Do and Kung Fu seems to have eased her job in the roles she played as a stuntwoman.

Moreover, Athena Perample is a qualified competition-level gymnastic performer and an incredibly fit fitness enthusiast. To be fear, she didn’t have to use her full repertoire of skills in the Army of the Dead movie, but the stunts she executed do suggest that she will set new standards in stuntwomen movies in the future.

The director Zack Snyder says, “the actress, Athena Perample, who plays the zombie queen is amazing, and all in, and just so cool’; yeah, he would be thrilled to get the services of such a talented girl for his movie.

We urge you to watch Army of the dead to relish what we have elaborated on, and it is a top-cupboard product.

Here are some of the titles Athena Perample appeared that you should watch if you love her stunts. We have handpicked the most famous out of the lot, and until now, most of the characters are related to stunts.

WandaVision (2021): Two super-powered beings live in a city and go through various situations along the way. Athena plays the double of Kat Dennings.

Mythic Quest – Raven’s Banquet (2019): The owner of a video gaming company struggles to keep his video game “Mythic Quest” on top with his staff members. Athena Perample plays the role of “Tiffany Winters.”

Euphoria (2019): The story is about a group of high school students; they come across drug, sex, and violence issues. Athena Perample plays utility stunts in three episodes.

Animal Kingdom (2016): Goes around a Southern California family whose lives are filled with criminal activities. Athena plays the role of a stunt double in four episodes.

L.A. Clippers Dance Squad (2016): This Reality Show has 8 episodes. There is only one season. Athena Perample had a main role in this TV Show.

The following are some of the activities and facts about this gorgeous young lady.

Athena Perample is a hugely talented and gifted young actress. Although we use the word “gifted,” she has worked really hard to reach the level she is at right now. As far as we are concerned, the movie Army of the Dead is her turning point, and we are pretty much sure that more mind-blowing titles will come to the screens in the near future. If you know more about her or have anything new to share with the world, this is the place for you. Please comment on them below. Have a great day, guys!